I have also written several books for older children.

The third and final book in “The Britannia Mysteries”, published by Coppertree Press, is now available to buy from Amazon.  It is called THE LOST TREASURE OF AQUAE SULIS 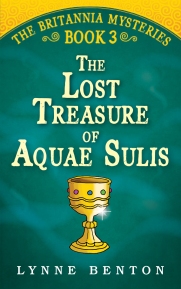 Set in the Roman city of Aquae Sulis (present-day Bath) it continues the story of Felix and Catrin as they visit the magical Healing Waters.  However, when they discover that a serious crime has been committed there, they determine to solve it, especially when it becomes very personal.  I hope readers will feel that the series has ended satisfactorily.

The Second book of my Roman trilogy, “The Britannia Mysteries”, the sequel to The Centurion’s Son, is now out.

Book 2 is called DANGER AT HADRIAN’S WALL.  It is published by Coppertree Press and is available from Amazon.

“DANGER AT HADRIAN’S WALL” continues the story of Felix and Catrin as they follow the Legion north to Hadrian’s Wall, despite Catrin’s premonition of danger.  There they face challenges to their friendship as well as their lives, and when Catrin disappears, Felix has to go into the wild country beyond the Wall to find her before her premonition comes true.

Can he find her in time?
What will happen to her, and to the Legion, if he doesn’t?

My latest is now out!  It’s the first of my Roman trilogy, “The Britannia Mysteries”.  Book 1 is called THE CENTURION’S SON.  It is published by Coppertree Press and is available from Amazon. 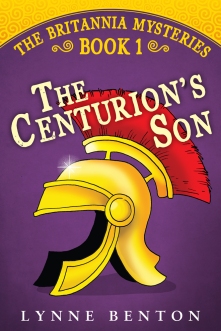 THE CENTURION’S SON is set in Isca, Roman Britain (present-day Caerleon, South Wales) in 312AD.  Felix’s centurion father, Gaius, has disappeared, and Felix is desperate to find him.  Then the Legion accuses Gaius of having deserted, and threatens to sell Felix into slavery as a punishment.  With the help of his slave friend Catrin, Felix escapes, and the pair determine to prove that Gaius is innocent.

But why does everyone else think he is guilty?
Can Catrin’s second sight lead them to the truth?
And can they find Gaius before Felix is sold as a slave?

THE GLASS-SPINNER is also published by Coppertree Press and available from Amazon. 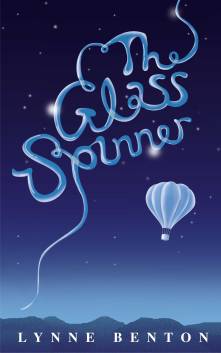 In “The Glass-Spinner”, Mum has left home after a row with Dad about his unreasonable behaviour, and Dad whisks 12-year-old William off to the Lake District, where strange, magical things start to happen.  But as Dad’s behaviour gets worse, William discovers that there is another world close by, a world where something has gone very wrong.

It could affect his own world.  Is William the one to go into the other world and put it right?  Can he stand up to the terrible Mangor?  If he does, will it help Dad as well as his friends?

And then, will Mum come back?

My previous book for older children is JIMMY’S WAR.  It is published by Coppertree Press and is available from Amazon.

“Jimmy’s War” is set during World War 2.  11-year-old Jimmy is unexpectedly faced with the task of getting himself and his little sister Molly out of London to safety.  But where can they go?  And can Jimmy stop Molly from learning the dreadful secret he is carrying?

The story is set partly in London and partly in Cornwall.

OTHER BOOKS FOR OLDER CHILDREN INCLUDE:

A new retelling of an old Cornish myth, “THE MERMAID OF ZENNOR“.  Published by Franklin Watts on 11th July, 2019, it tells the story of a mermaid who came out of the sea to hear the beautiful singing of a young man in the church choir, and what happened when they fell in love.

This is a retelling of the classic story by Jules Verne, retold for Franklin Watts in their EDGE series.

20,000 LEAGUES UNDER THE SEA is also published by Amazon

This is the exciting story of Professor Aronnax, who, while looking for a huge sea monster, finds himself on board an amazing submarine under the captainship of the mysterious Captain Nemo.  But it appears that Captain Nemo has no plans to let the Professor or his friends leave – ever.

I have also written two DUAL LANGUAGE books.  These are for children learning French or Spanish.  Each book has the story in English on one page, with the translation into French or Spanish on the opposite page.  They are both published by bsmall in their LET’S READ series.

The first of these is THE CHARIOT RACE.

It is the story of Bak, a slave boy in Roman times, who wants to go to the Chariot Race, but his cruel master won’t let him go.  Instead Bak must take the donkey and collect some pots for his master.  But the donkey may have other ideas… 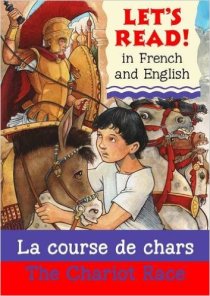 Both versions of The Chariot Race are also published by Amazon.

My other DUAL LANGUAGE book is called STRANGER IN THE SNOW.

It is about Paul and Anna who go to stay with their dad in his new house in the forest.  It is very isolated, and when Anna sees a light she is afraid there may be ghosts here.  The next day it snows, but there is a strange patch of grass with no snow on it.  What is going on?  Can Paul and Anna find out? 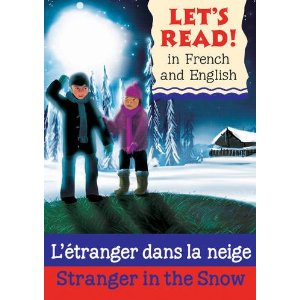 My first published story was “Raiders!”, of which I am very proud.  It is about the Viking invasion of Britain in the 9th century, and is often used in schools. In the story Jack, from the present day, sleeps in an old tent which takes him back to the 9th century, when he becomes Edric, an Anglo-Saxon boy, who sees the Vikings coming…

RAIDERS! is published by and available from Pearson Education Ltd.